This week, the class and I were informed that all our chicken embryos for our final lab were dead from being frozen overnight. That's Minnesota spring weather for you! After morning our losses, we played with bubbles to brighten the mood. No not really. There is actually a scientific aspect to soap bubbles!

Bubbles actually have similar attributes as cells. One of their main aspects is maximizing their free contact to minimize free energy in their system. In fact, numerous books have been written about the art and science of bubble making. It has been know that soap bubbles solve complex mathematical problems concerning their spatial orientation because bubbles will always find ways to make the smallest surface area between a set of contact points.

In our lab, we set out to create bubble patterns to display just that! To solve the dilemma of our bubbles popping within seconds, Professor Myers provided us with a general recipe containing Dawn dish soap, glycerin, and water. We tweaked it, more or less, to the desired proportions we wanted to maximize each bubble's lifespan. So this meant using as much glycerin as possible. Listed below are just a few of the patterns I manged to create.

Evolutionary Development and our Brain:

This week in class we discussed the article "Developmental Mechanisms for Variation and Constancy in Vertebrate Brain Evolution." It was a pretty interesting article, in fact, I really enjoyed it. There is so much about brain development unknown to mankind and so much more to learn. The brain has always been something that has appealed to me. Probably because of its immense complexity and the very same reason that we do not know everything about it.

However, at least we know that there is universality in our brain's developmental mechanisms. There are factors such as neurogenesis timing, alterations in cell cycle rates, and changes in brain patterning that lead to the variation of human brains--among other things too.
Posted by Unknown at 7:15 AM No comments:

Well I'm still calling South Carolina my home until tomorrow morning. It has been an extremely busy week though. Frequently going out to eat, running on the beach, enjoying the hot tub at the pool, and relaxing really takes a toll on a man. Kidding aside, it has been an enjoyable time. 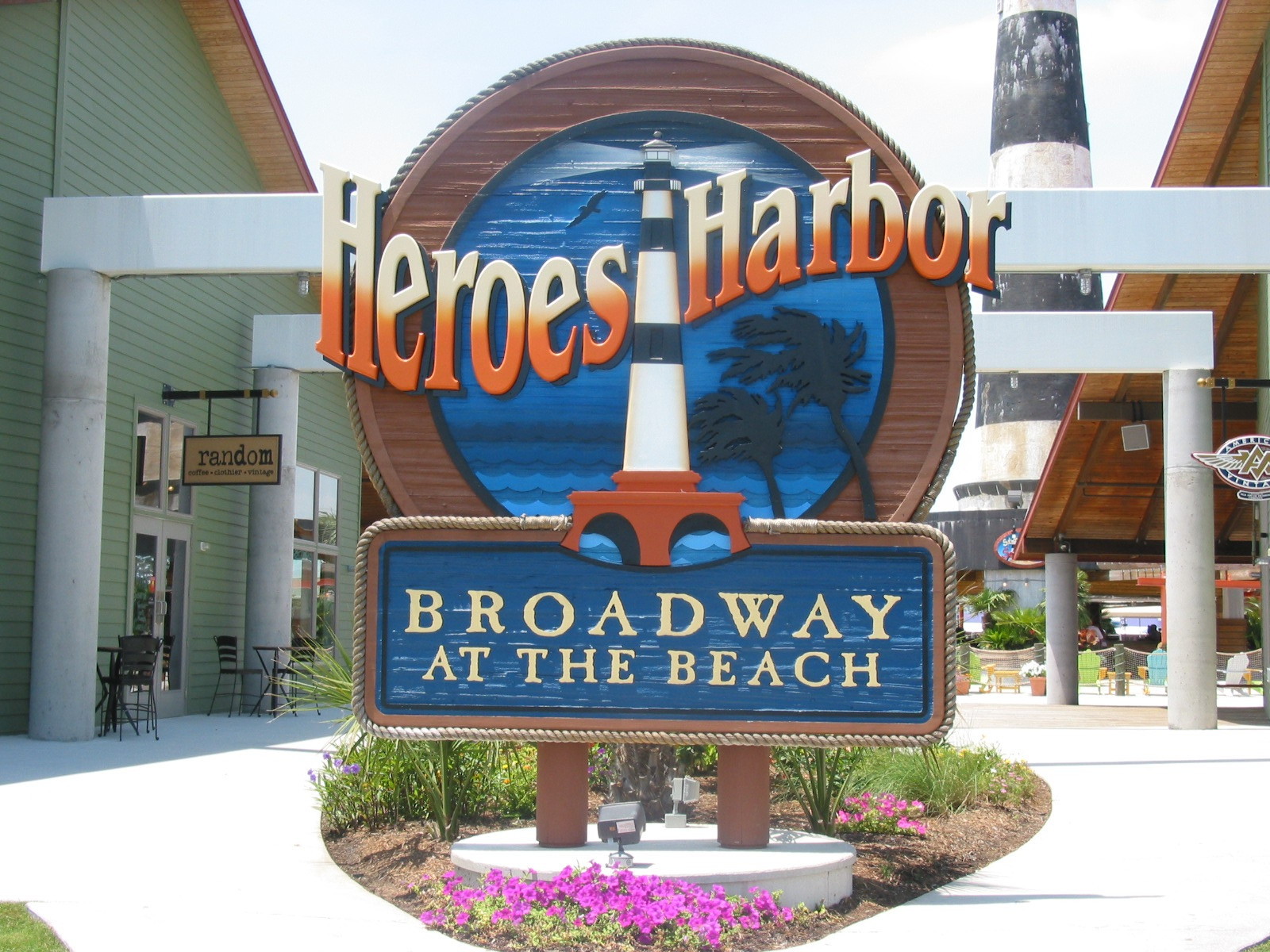 The past evening I had the opportunity to go to this tourist attraction/shopping area (shown above) called "Broadway on the Beach." It was basically a miniature lake surrounded by little shops, bars, and restaurants. It was fun and all, but one of the interesting things to me there was the feeding stations they had for the fish. Now, these fish were not ordinary. It seemed they were trained to look you in the eye and try to hypnotize you to give them food whenever you walked past. With their mouths agape, gasping for food, and large eyes, it was almost hard not to. 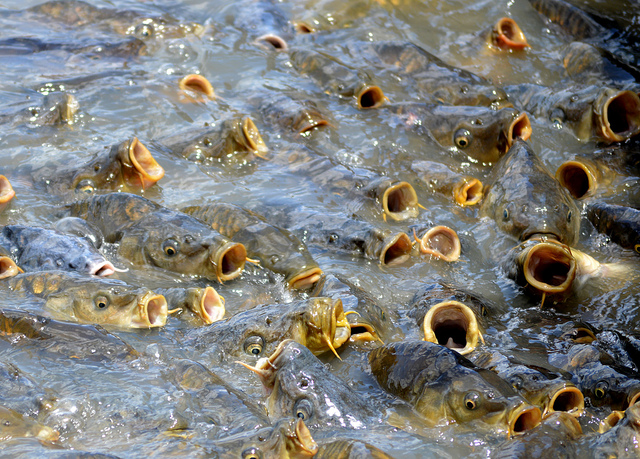 It was said that literally thousands of Israeli Carp, Catfish, Japanese Carp, Bream and Hybrid Bass were purchased to stock Lake Broadway, when the complex opened in 1995. Since then, they have multiplied to numbers unknown. the fish (as pictured to the left) absolutely pack the  tourist feeding areas in the water. I wonder about the developmental implications of this situation are. What is exactly going on here? Was it just that the fish do what they can to survive? It was rather interesting.
Posted by Unknown at 6:38 PM No comments:

Happy Daylight Saving Time! I am writing this blog from the comfort of my hotel in South Carolina! I escaped the long winter of Minnesota and get to hang out on the shoreline of Myrtle Beach for a week!

This past week in class we discussed the implications of regulatory divergence modifies limb length between mammals a paper written by Chris J. Cretekos et al. It is quite an interesting paper. It gave me a developmental perspective of how exactly bats and mice differ in their gene expression throughout their respective gestation periods. Their experimental methods were quite intriguing and intimidating for me at the same time. Since I am not familiar with many DNA sequencing techniques, it was difficult to mull through the paper and decipher their results, however, I did learn quite a bit. For instance, Prx1 plays a major role in the proper elongation in bat wings. The paper hypothesized that it is indeed Prx1 (or MHox)  that contributes to the morphological differences in forelimb development of both the bat and mouse. However, Prx1 did not explain the whole story behind limb morphogenesis. In their experiment, their Prx1 mutants did not reproduce the shortened limb phenotype of mice which Prx1 was knocked out. This led them to believe there are additional factors, such as the possibility of another limb enhancer.

Well, I think I'm done. Off to the beach! 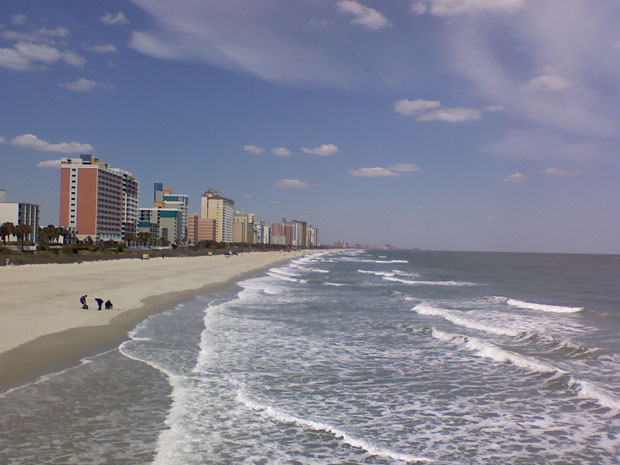 Posted by Unknown at 7:23 AM No comments:

Wow! Finally caught up! I guess this is what happens when you do not want to post garbage on the internet for numerous people to scoff at (Note: If you already think poorly of this blog then this following post and any posts hereafter are invalid. You should shut off your browser right now and go read a book). Nonetheless, I know even experienced bloggers that fall behind. Take thee PZ Myers for instance. I doubt he is ashamed to say he needs to catch up once in a while. This being said, he needs to post a summary of what he taught in class on Wednesday the 20th! It is always a good refresher to read a summary of the classroom teachings and discussion, but when I miss class just one day... Oh boy. What do I get to read? Nuffin.

Now, I was actually going to take this time to talk about the goings on in our Dev bio lab. Myself and other students were to cut up worms for nematode cultures last Monday. It was not the most pleasant experience, but anything for science! After clearing out the drawer of last year's worms (delightful!) and storing our petri dishes, we were free to go for the week, aside from the occasional visit to check up on the cultures. In fact, being the good student I am, I stopped by three days later to check up on them. The image below is how they looked after three days. The sight of them was more pleasant than the smell, trust me! Hopefully, they are in good shape for tomorrow's analysis. 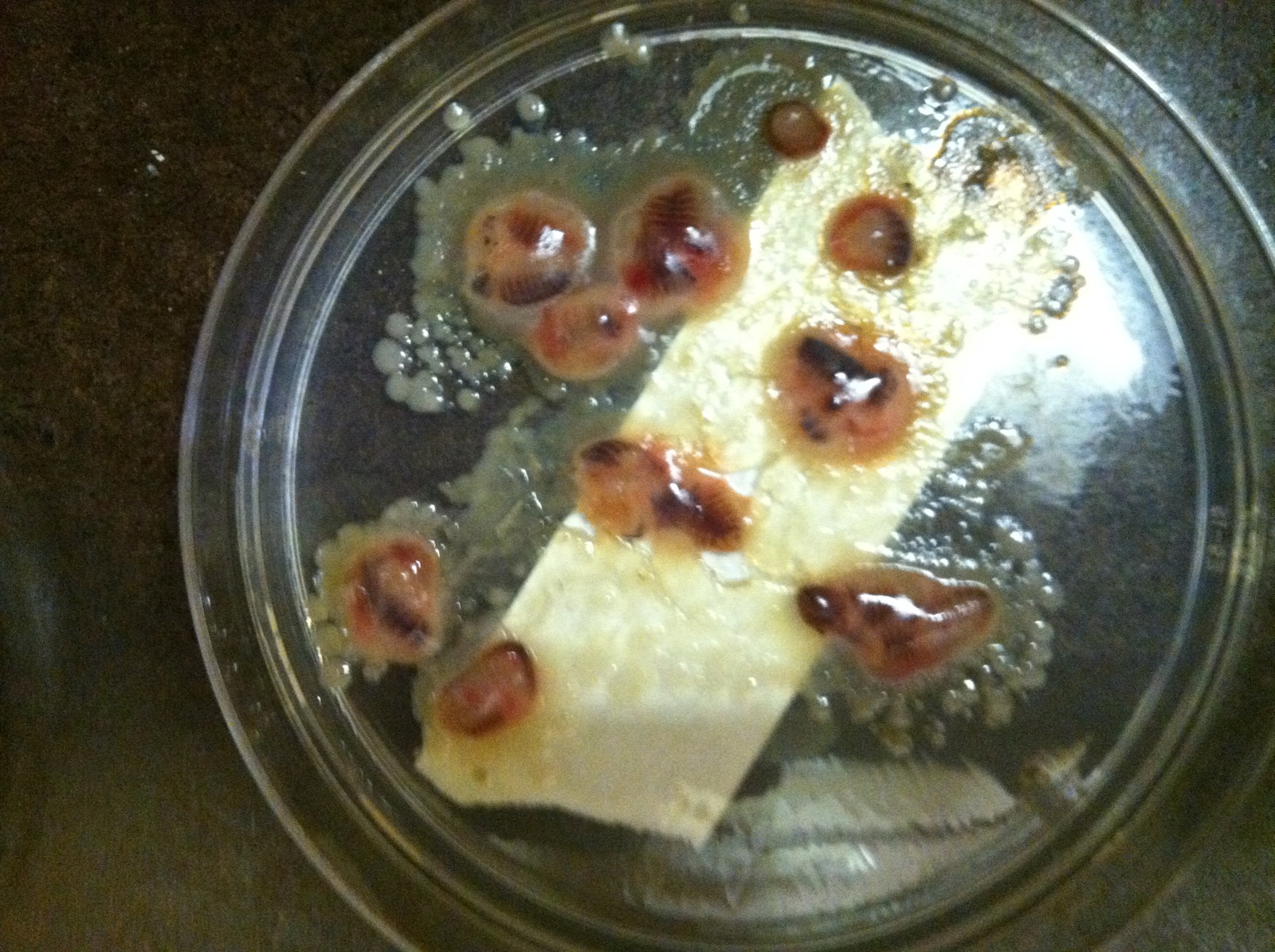 We are studying these creatures because their developmental stages are precisely worked out (plus they are free). In fact, our study of nematodes in lab parallels that of lecture. In class, we talked about the development of the vulva in the nematode.  It is an excellent example of induction of cellular fates and similar mechanisms that drive the differentiation of a multicellular organism. This example is well known because it has very a specific pattern of development. We know exactly where all these cells came in the final product.

The source of this induction effect is the anchor cell of the nematode. It is a source of an graded inductive signal which initiates the differentiation of adjacent cells. The specific induction pathway include many genes that encode common proteins such a EGF which is found all over the animal kingdom and ras/raf which mediate growth and differentiation. Ras/raf are involved in human cancer as well. 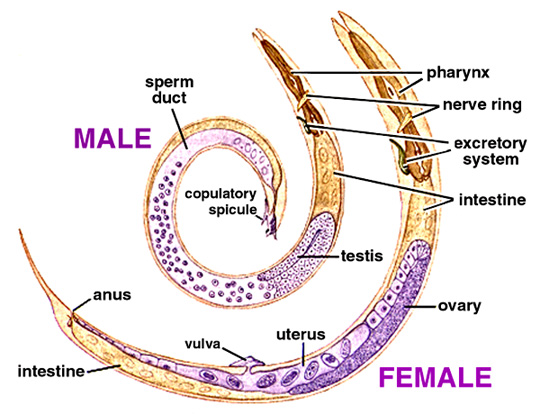 Nematodes can be both dioecious (meaning there are two separate male and female individuals) and hermaphroditic which means that the worm can self fertilize its eggs. After establishing the mechanism for the development of the vulva we talked about a phenotype that can be detrimental to the survival of the parent worm and that is the bag of worms phenotype. It is the vulva-less phenotype and typically eggs will be self-fertilized, hatch internally, and eat the mother! Not a desirable trait to any extent.

The next week or so we will be  focusing on the examination of the nematodes and after that: flies!

So that is it. Auf Wiedersehen!

Posted by Unknown at 7:25 AM No comments:

What are these creatures?!


If you do not know the answer (before looking at the caption), you have not been missing out on anything except the international Eelpout Festival!

These fish (top left) are actually local celebrities at this Minnesotan event in Walker, MN. However, these are not eelpout. The festival which celebrates the eelpout (Zoarces viviparus) should reconsider their name because they are actually burbot (Lota lota)!  It is a common misconception to confuse the two. However, there are distinct differences between the eelpout and the barbot as can be seen by comparison of their physical features.